A mini split, also known as a ductless, is an air conditioner designed for residential or commercial use. They tend to be used in smaller homes or homes where installing a central air-conditioner can be difficult. A mini split works similarly to a central system in that it operates both indoors and outdoors, but it does not involve complex ductwork.

A mini split works well for a small house or an individual room. For example, a hotel room or Airbnb could use a mini split to let the guest control how the room’s temperature is. So if someone in one room likes it warmer and the other wants it cooler, both can be happy. Some mini splits allow for multiple rooms to connect to a single outdoor unit as well. Because it only operates in one room, it can save energy and money rather than having a central AC heat or cool an entire room. Another way a mini split can reduce energy use is due to its lack of ductwork. Mini splits work well for interior decorators as well. For example, it's easier to install a unit on a particular floor or ceiling. Meanwhile, a central unit must be traditionally placed due to how the ducts work. Mini splits also have an easy way to control them. Many use remotes, which means that you can control them from a distance. You usually have to get up and walk to a thermostat to control a traditional HVAC. A mini split remote control can have various bells and whistles, including temperature, fan speed, rotation, etc.

Mini splits can be costly due to how much cooling capacity they need. Per ton of coolant, one can pay up to $2,000. A mini duct can be pricier than a window unit as well. A mini split could be less expensive, but the cost can quickly add up depending on how you use it. An expert can tell you what type of air conditioning will help you save money in the long run. A mini split can also be prone to poor installation. If an installer does not choose the best location, it can lead to the room not being cooled properly. Due to the mini split being more prominent, it also lacks the built-in appearance that a duct AC has to offer. You also have to install a mini split in an area where it can drain if needed. Again, depending on the home, this can be problematic for you to do. A mini split might not provide enough cooling on hotter days, depending on where you live and which unit you have. This sentiment applies further if you have it in a larger room. A mini split might also be difficult for someone to repair, having to be removed altogether. Because of this, it’s vital to keep regular maintenance to ensure it’s working well. If you are looking to install mini split in Phoenix, AZ, please submit your request on our website. 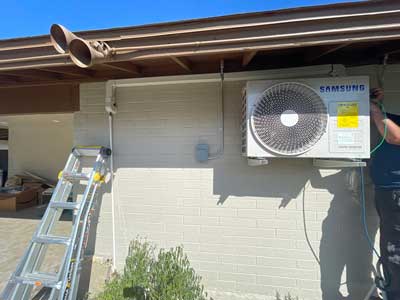 Mini split air conditioners originate from Japan and come from Mitsubishi. After World War II, Japanese interest in air conditioning began to grow, but there were several problems with bringing air conditioning to the land of the rising sun. In Japan, traditional AC units could not be used in many homes due to how small they were and how thin the walls could be. In addition, energy costs were high at the time. In 1959, Mitsubishi invented the first mini split air conditioning, and many in Japan still use it to this day. If you’re ever in Japan, there’s a good chance you’ve seen one. Besides Japan, the mini split was popular in much of Europe. However, it took a few decades until the US started to use mini splits as well, with many still not knowing the advantages they could offer. While the sales have improved over the years, many still prefer the traditional AC. One reason for this could be how homes in the US are structured. The sales in the US grew popular in the 2000s as more people started to move into smaller homes. In addition, the popularity of mini split can also be attributed to services such as Airbnb, where hosts install these air conditioners into guest rooms to let the guest control the temperature in their room without affecting the entire home.

How much energy your mini split uses can depend on the unit you purchase and how often you're using it. Some units will be more energy efficient than others, but on average, you can spend about 600-800 watts on cooling. However, this can depend on the time of year. During peak season, you could be spending over 2,000 watts on cooling your room. Usage can depend on the dimensions of your room as well, with smaller rooms requiring less power and vice versa. Proper installation and ordering the right unit can reduce usage with a mini split. Talking to a professional can make this much easier for you and save you some headaches in the future. Some Statistics:

A mini split is something that a lot of people consider when looking for different air condition needs. But, due to the large costs of these, they might not be the most viable choices. There is also the space concerns that go along with this too, as a mini split may cost double what a windowed unit costs for some people. But, they are a possible way to cool down a space, and for those looking to put something in an Airbnb or maybe an apartment room, this is something that is a possibility for many who use it as well, and can prove beneficial too.

Power Save AC: https://powersaveac.com/blog/post/how-many-watts-does-a-mini-split-use How Many Watts Does a Mini Split Use?

$95 Service Call
Will Be WAIVED from Your final Invoice

Schedule your service
Your Message Has Been Sent!
We will be in touch shortly
Ok